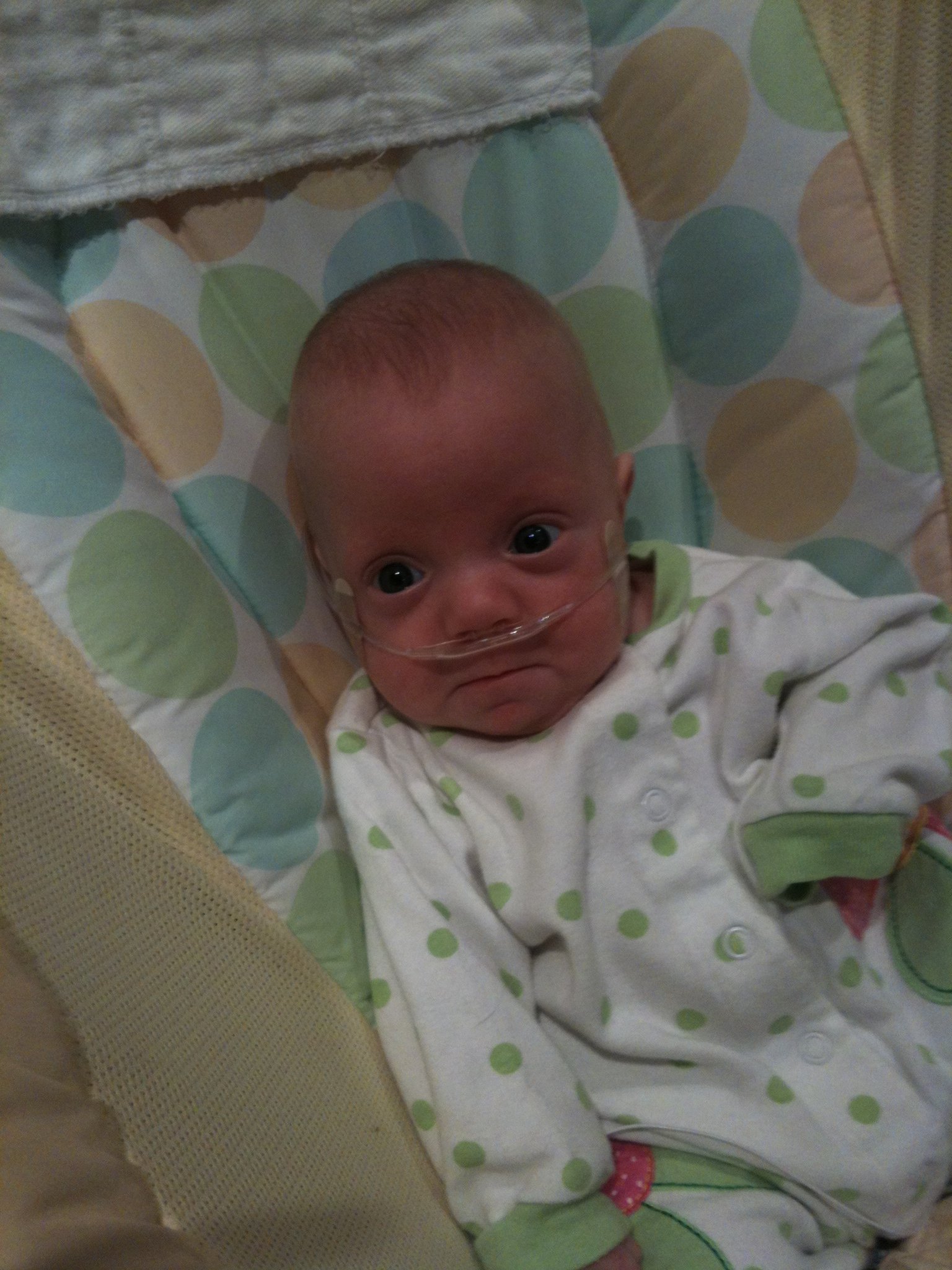 So Coraline has been home for two weeks now and I think we’re doing pretty well.  Thought I would give a little update about what’s going on with her and post some new pics.

Eyes:  Her ROP is back down to Stage 1.  We had her first ophthalmologist appointment at Riley (which was a little bit of chaos) and they are hoping to only have to look at her one more time before we get a nice 6 mos break from them.

Heart:  We had her cardiologist appointment today, also at Riley, and her very kindly doctor said that she sounded pretty good.  She got an EKG and that looked pretty positive.  She didn’t even seem to notice getting the test done. 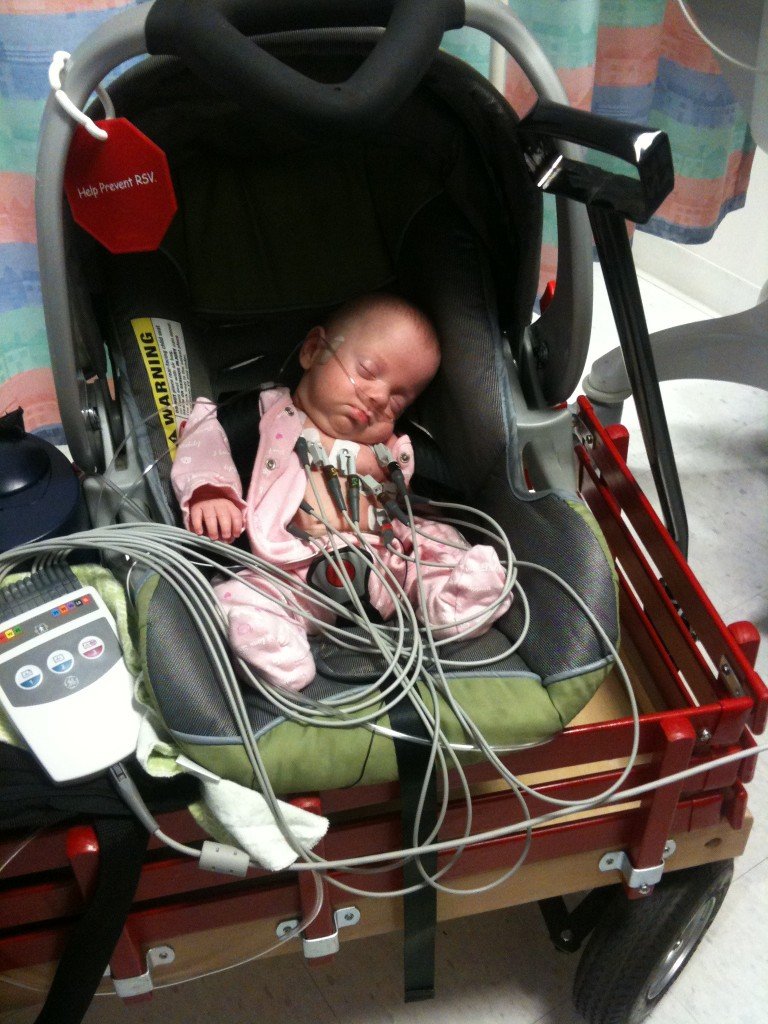 Lungs:  She doing pretty well on her O2.  She hasn’t had any real episodes of apnea, which we weren’t all that concerned about.  Her oxygen does drive me nuts, mostly because the cat thinks her tubing is a toy and jumps on it every time I take her into a different room.  When he does this it makes for a shocking stop when we’re trying to turn a corner and we get yanked back.  The portable O2 is also stupid because it’s like a tower, and you have to keep it upright to work, which in the moving car is not easy.  Poor design.  Very poor design.

Development:  She isn’t really smiling yet with her mouth…but she smiles with her eyes.  🙂 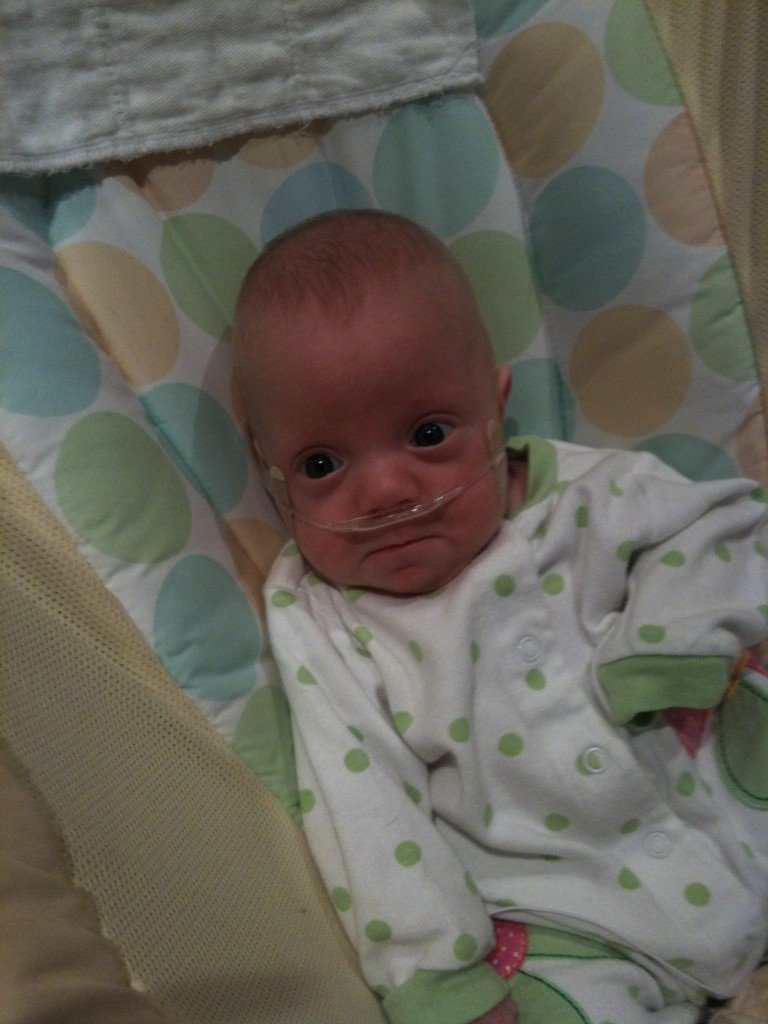 She is really into staring at high contrast things.  I found an app for my phone which is just slides of black and white pics with little sounds that go with each one.  She LOVES it.  She is also very into the picture that is over our bed.  Ceiling fans are also the coolest.

Eating:  She hasn’t gained a ton of weight, she’s about 9 lbs 2 oz.  She has been eating pretty well though.  Unfortunately she has also been spitting up quite a bit.  Hopefully the spitting up slows down a bit and the gaining weight speeds up.

Social Life:  Her and the animals get along swimmingly.  The dog loves to sniff her…and often watches over her. 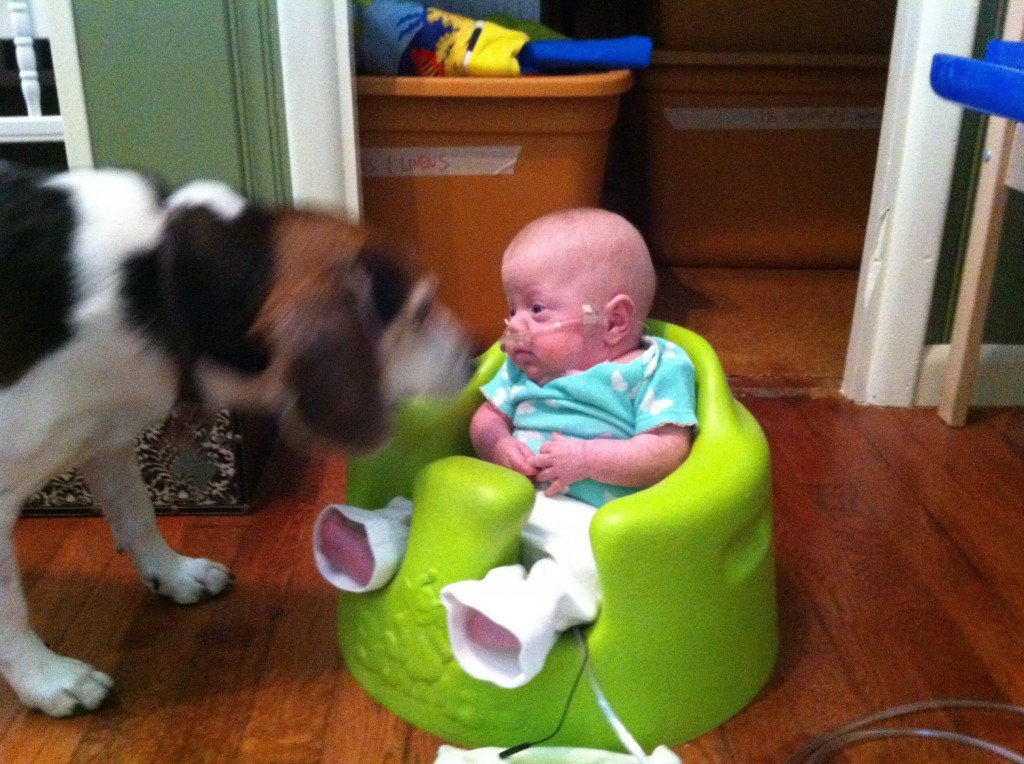 The dog also doesn’t seem to care that she has ears and does not refrain from his insane barking.  She doesn’t seem too bothered by it.  Coraline also has a new buddy, Kellen, who was born this week.  She’s obviously excited to meet up with him when she’s more free from her wires and tubes.  She also has some neighbor buddies who are so excited to meet her, but they are underage.  They did make her a welcome home sign, which was super sweet.  We’ll feel better about kids coming to visit after our first pulmonologist appointment.

In addition to Coraline coming home last week, Andrew’s grandmother, Dorothy Nelson, died.  Sadly, Coraline was not able to meet her great grandmother before she died, despite being in the same hospital at the same time.   We are even going to have our first babysitters this weekend so we can both attend the funeral.

Thanks to everyone who has been so helpful during this very busy time.  We are lucky people.