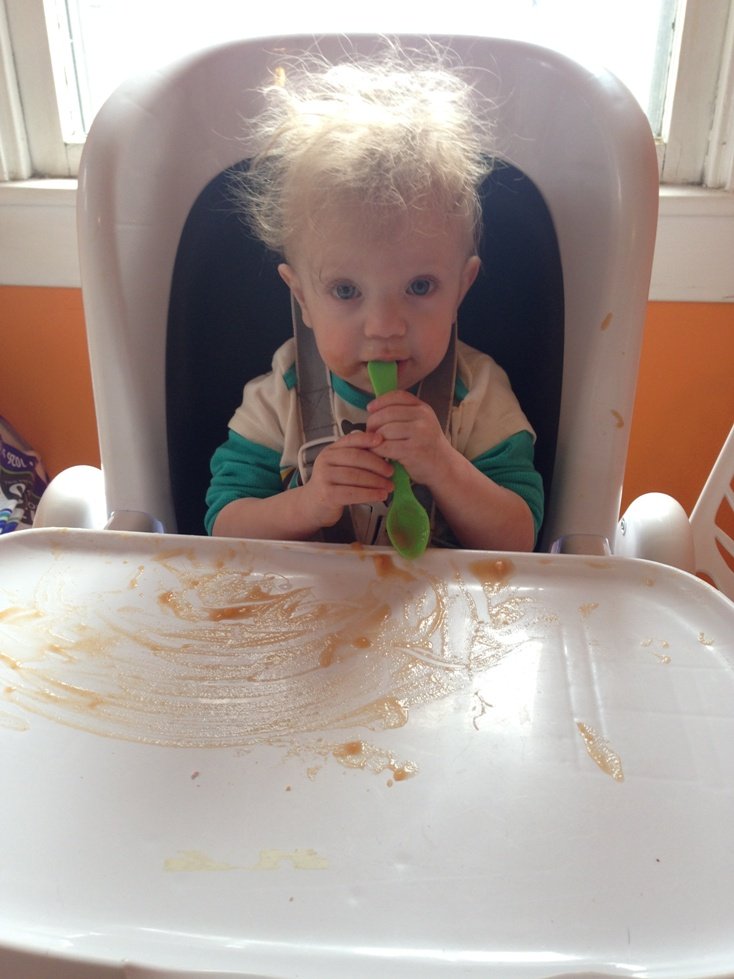 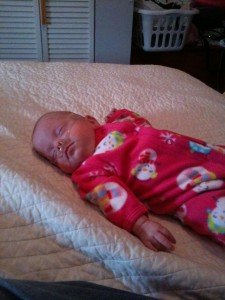 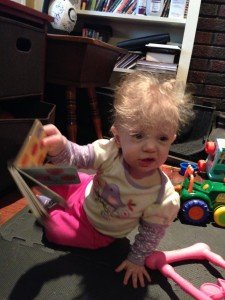 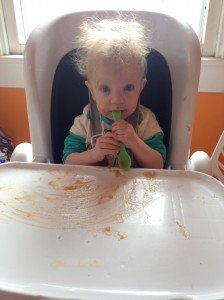 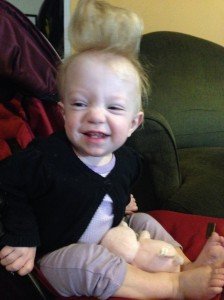 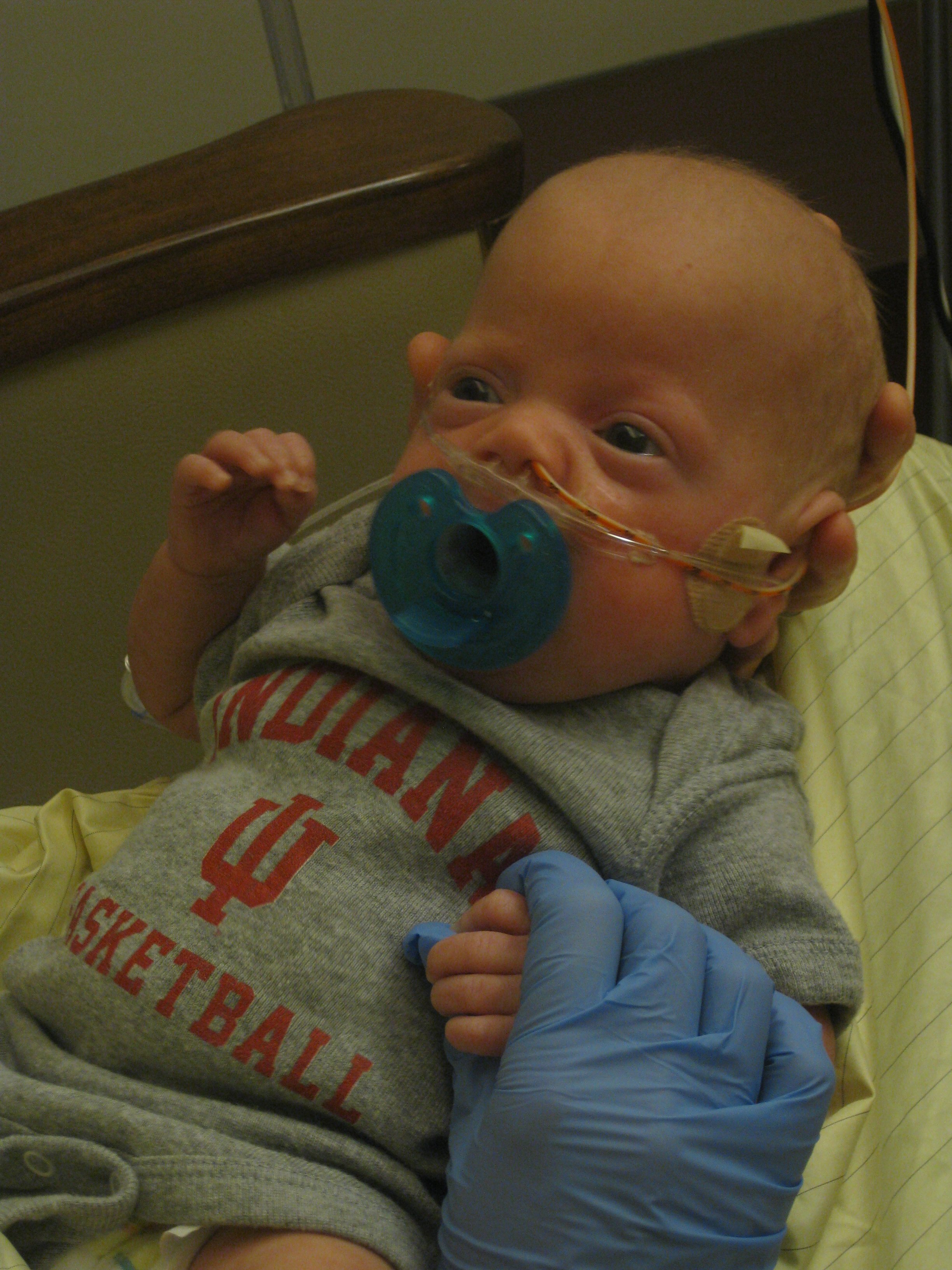 It’s IU basketball season, as all of you know.  I had been searching high and low for some baby candy-striper warm up pants for our new and tiny IU fan.  You know what?  They don’t exist.  This is very upsetting.  So I gave up on IU gear.  In the mail, however, a friend sent us a lovely new IU onesie to show our Crean and Crimson pride.  Woot!  So despite the upsetting loss to Minnesota  (Minnesota?  Yes….I know…)  she was sporting her new gear today.

So what’s new with Coraline?  A TON!

Coraline has been switched to a flow of 1 liter at 100% (which is what babies who are sent home on oxygen are set on).  She is kicking butt on it.  She fell below 95% just twice while I was there today and bounced right back up in seconds.  She is usually stuck on 100%  Woot!

This means that Coraline gets to eat via mouth as well!  We tried to get her interested today but she slept during my entire visit.  It was almost ridiculous.  We tried everything to get her to wake up.  She was not having it.  She was, however, super awake before I got there, and her nurse Christie got to have some fun time with her while she was checked by the speech therapist to see if she was ready to eat. 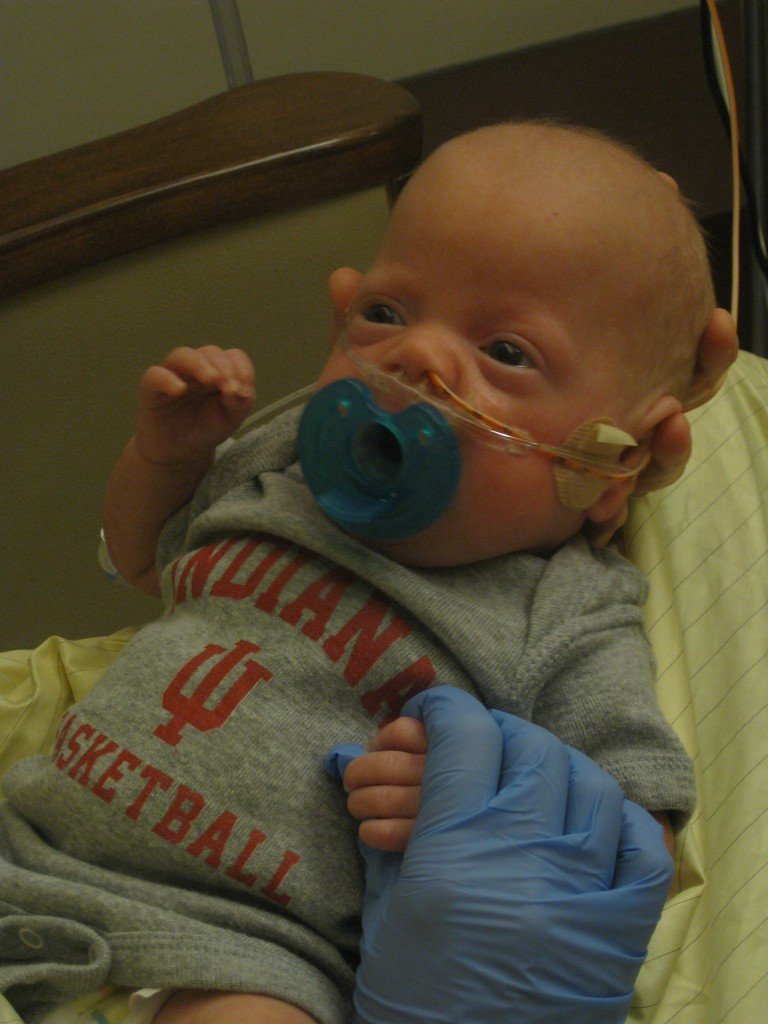 Then Pat, her Occupational Therapist, did rolls and crunches with her.  Pat had very positive things to say about her progress! 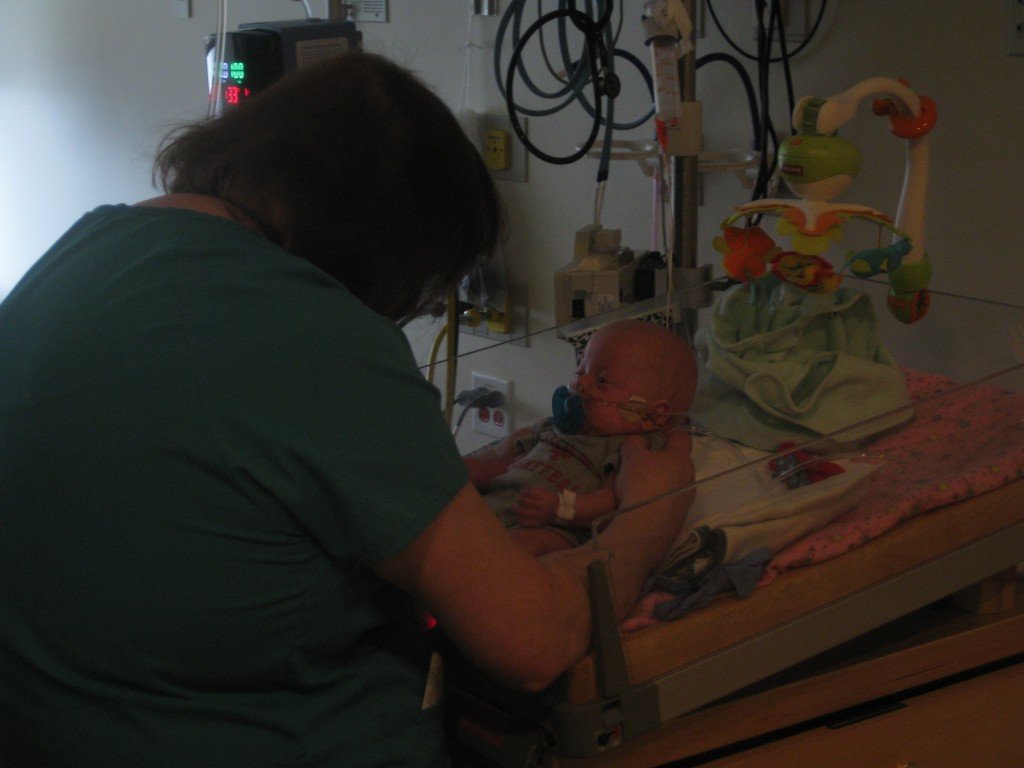 All this craziness pushed her into a sleepy daze for the rest of my visit.  So we will try eating again tomorrow.  No rush.  She’ll still be in the hospital for another few weeks getting herself sorted out.

She will have her 100 day birthday tomorrow, which coincides with her due date.  Very strange to think that I have a 3 month old who should just be born…like…today.  For her 100 day birthday, her primaries work together to throw her a party (which she is not invited to) where her parents will get cake and presents.  It’s all very exciting.  She will most likely hit the 7 lb mark tomorrow.  She’s less than half an ounce away right now.  Not too shabby for a birth weight, huh?  Sooo…her adjusted age begins tomorrow.

For those of you who don’t know preemie aging, they have two ages.  They have their birth age and their adjusted age.  Their adjusted age is just how old they are based on their due date.  Tomorrow her adjusted age will be one day, but her actual age is over 3 months.  She will have two ages until she’s about 2-3.  That’s usually when preemie babies who are not developmentally delayed, catch up with their full-termer friends.

The bathroom is coming along great.  The tile is down on the floor and in the shower.  Stephen, Andrew’s brother, was over today helping out with the electric.  The toilet is IN.  The shower is usable.  The contractors are coming over on Friday to finish up their end of stuff.

We are trying to decide on what to do about a shower curtain since we have sort of a wonky arched shower.  A normal shower curtain will not do.  It will be too short.

Trying to keep a house clean while doing renovations has proved to be very difficult and frustrating.  The animals are not helping.  We had a rough night last night.  That’s all I will say about that.

We got a notice from the city saying that we had to move all the rubbish, from the demo work Andrew did, by March 8.  So this weekend a bunch of guys are coming with trucks to assist in the process.  I’m glad so many people have been willing to help.  It should make everything go pretty quick.  It’s so nice.  (Thanks, people)

They also wrote up a citation for our jankety garage.  Yes, city inspectors, we know our garage is jankety.  If we wanted to keep it we would spend the money on it.  We have just been hoping that our stupid Cottonwood tree would blow over in a storm and squash it.  This hasn’t happened yet., so turns out we have to paint it.  That is supposed to be done by March 22.  That’s kind of insane since it probably won’t be warm enough to paint before then.  Arbitrary dates…I tell ya…  So…if anyone out there has a paint sprayer that can get the job done quick, let us know.