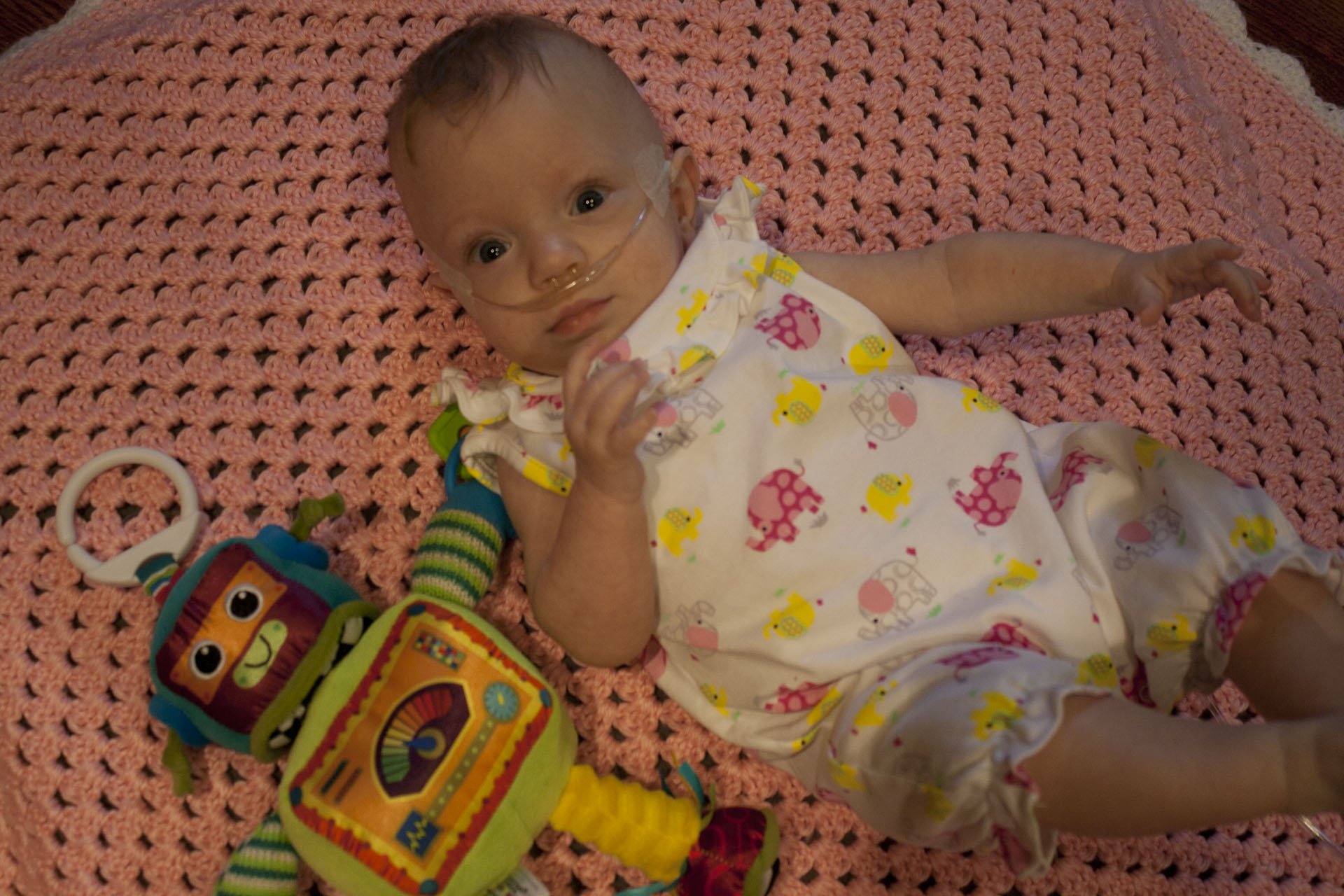 Developmental Peds:  Coraline is 4.5 months adjusted.  Or at least she was when she went to the doc.  And she is right on target with her adjusted age, and a little bit ahead for some things, developmentally.  The doctor did a few little games to test her.  She had to grab a red ring, and she switched it to another hand.  That is a big thing, I guess…?  She turned when Andrew called her name.  I had never noticed that she did that, and then she did it today and I was like, “Oh, huh.  I guess you DO do that.” 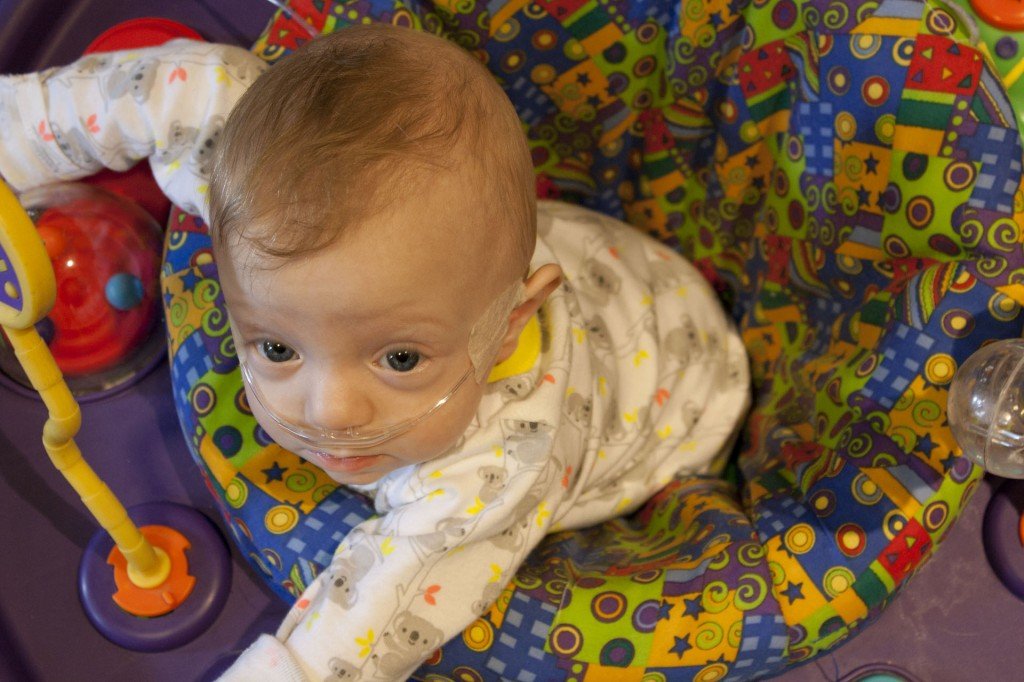 Loves her ExerSaucer and plays with most of the attached toys.

She’s still small for her age, but is growing on A curve.  We’ll call it “Coraline curve”.

He also addressed our feeding concerns which got WAY worse this week.  It seemed as though her Zantac just stopped working all together.  She was arching her back, shrieking in pain, and waking up in the middle of the night having a meltdown that only calmed when she was more vertical.  Bleh.  It’s been unpleasant.  And then she stopped eating.  So he wrote us some scrips and sent us on our way.

Then we got a call from the GI doctor where we were on the wait-list…and they got us in almost a month early (THANK YOU!)

GI doctor:  For those who don’t know…this guy works with the digestive system.  We had a referral to a doctor with Community North with the recommendation from multiple people.  If you’re looking for a pediatric GI doc, let me know.  I will send you to the best.  We LOVED him.

He agreed with the Prevacid as the next step for her.  He also recommended rice cereal with every meal, and to stay on the Zantac till the Prevacid kicks into full gear.  So instructions changed a little bit from Dev. Peds, but I trust this guy.   The Prevacid is supposed to really kick in somewhere between 10-12 days.  We are at day 6.  (sigh)  Times are tough around here with this nonsense.

The dev. peds guy had also put us on this stuff called Aryped.  It was used as an antibiotic back in the day, but they found out it actually helped to push food through the system by contracting the stomach muscles.  So we were on that for a bit and it turns out that in addition to moving through food one way, it also moves it through the other…meaning the child was a vomiting mess.  Like…bad.  So we stopped that.  The GI left it up to us whether we thought it was helping.  It really wasn’t.

Pulmonology:  AMAZING!  The pulmonologist was very happy with how she looks and sounds.  He was a little concerned about her slow weight gain still, but said he is less concerned about it being an issue with her working hard to breathe and more of digestion issues (duh).  He then turned her O2 off and we had a nice little meeting about what the next steps could be.  He said that after a little while the nurse would come in and check her O2 saturation after not being on for a bit, and if she’s in the upper 90s or higher then he’ll recommend a sleep study.  And then if that goes well we will go home on NO OXYGEN!!!!  None.  Like…the machine will not be attached to us.  She will still be on her monitor when she sleeps for awhile after we’re done with O2, but I feel better about her wearing that anyway.

So the nurse came back and checked her O2 and she was still at 100!  Go Coraline with your not-so-jankety lungs!

Weight Check:  I keep thinking that something must have been pushing more weight on the scale.  She couldn’t possibly be 11 lbs 12 oz.  I suppose we’ll find out next week.  But if that’s for real…then that’s awesome!  We also found out that Coraline will be getting her first Synagis shot in the beginning of November.  It’s weird to start thinking about winter again already.  I really am not ready.

And seriously, how do we have an eight month old?

And how is she so cute? 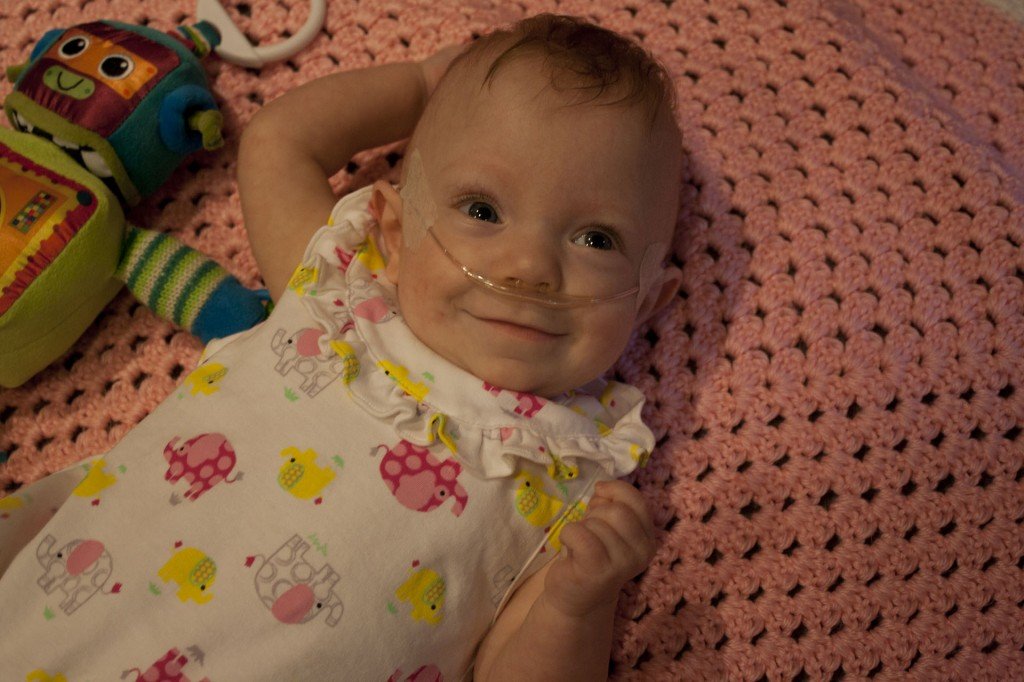 Smiling at Dad as he walked by. Smiles are given much more freely these days. 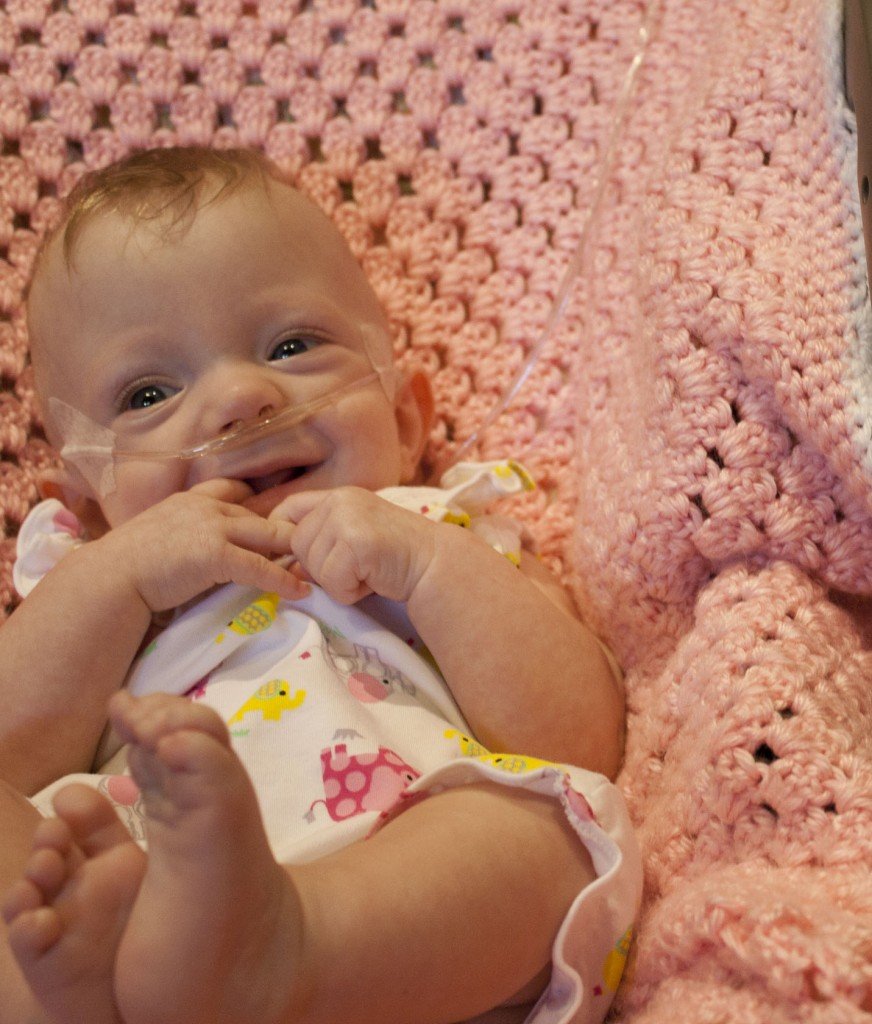