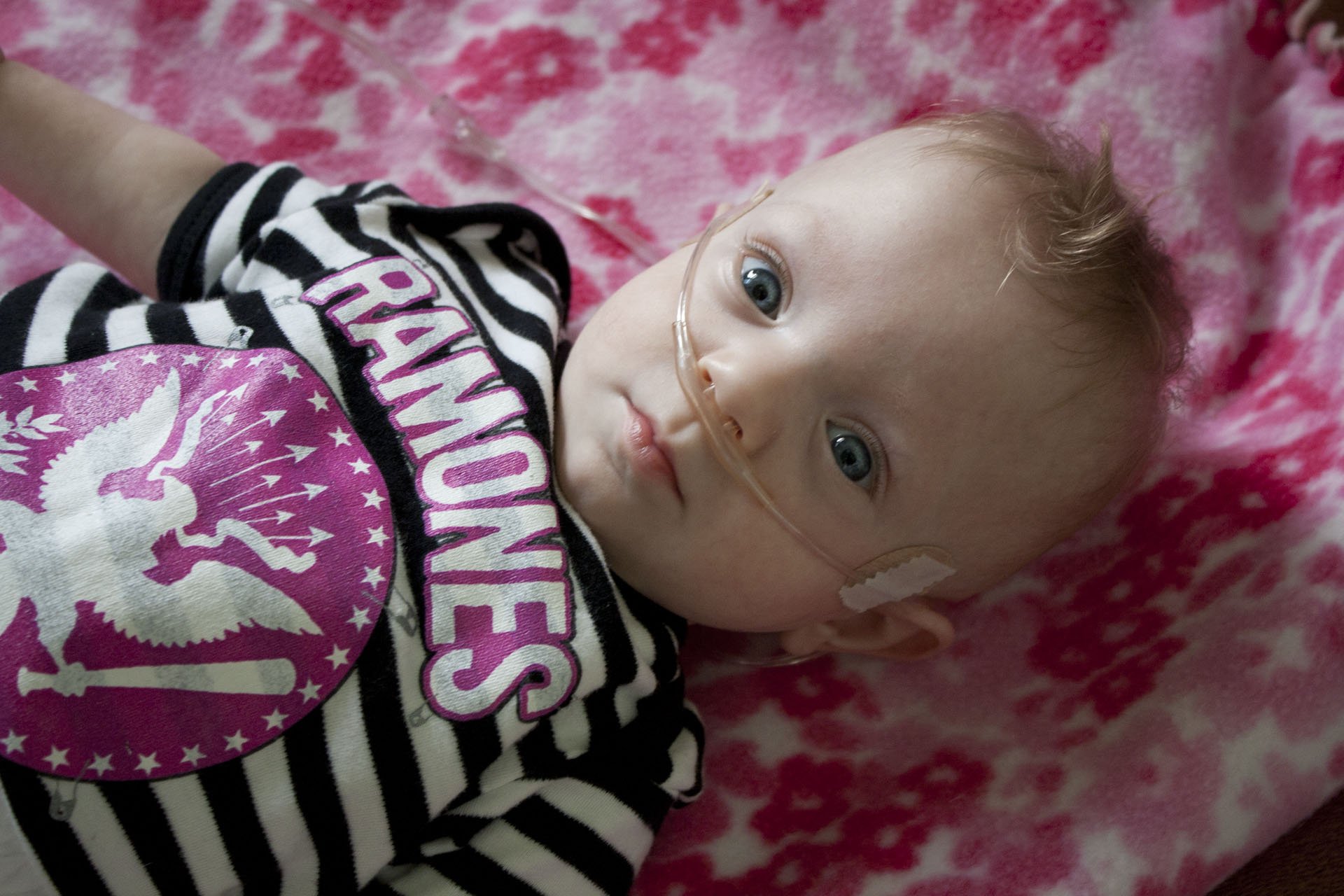 Coraline did her sleep study, a traumatic event for all of us.  It did make me appreciate that this child can have a real absolute meltdown and she has yet to have done that at home.  It can be really bad.  And in this case it was bad for a reason.  That poor kid had about 50 wires coming off of her from her head to her feet.  She was then completely wrapped up to keep all the wires in place.  Then her arms were restrained to keep her from tugging at them. 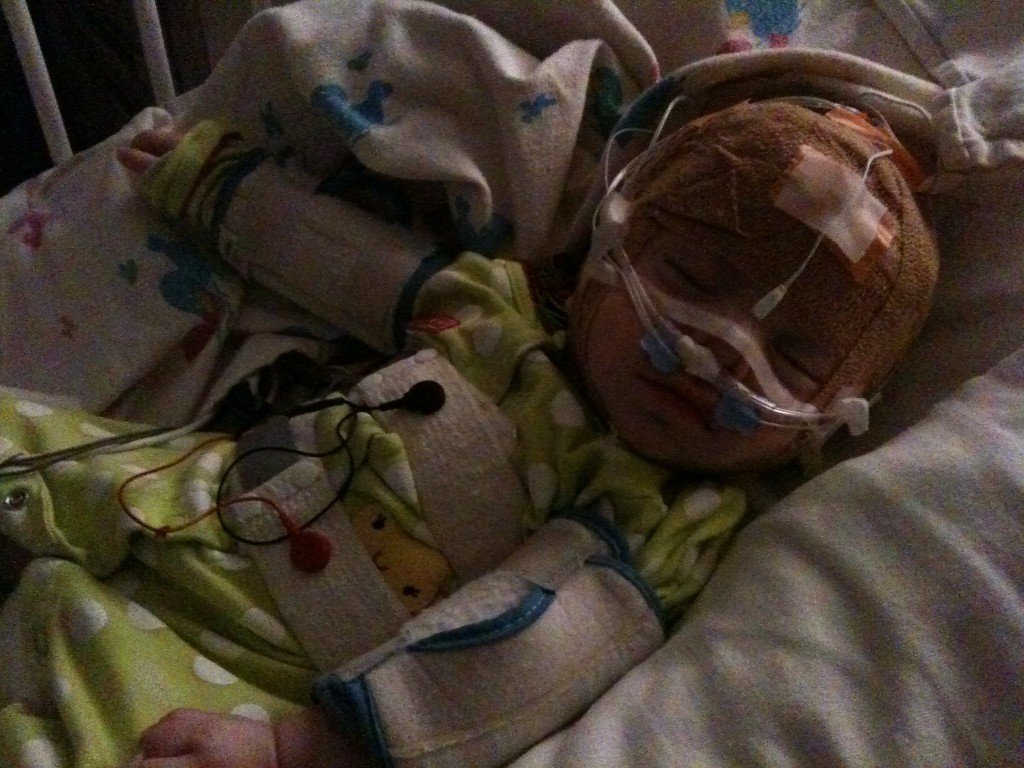 Poor poor baby. This was after she cried herself to sleep. Saddest baby ever.

I’ve also learned that once she is asleep like this, waking her up, even to feed her….bad idea.  Just let her sleep.  Bad idea.  For everyone.  Ugh.

Anyway, I won’t go into the detail of the sleep study, but if you ever find yourself in the position of needing one, or staying with someone who needs one, I have just one piece of advice.  Wear warm clothes.  And socks.

We were hoping to have this sleep study and be done with it.  But no.  We get a call from the doctor’s office.

“Well the sleep study showed us that she has some sort of obstruction in the airway.  Most of the time it’s just what we call Floppy Airway and they grow out of it, but we have to make sure.  So Coraline needs to come in for a bronchoscopy.”

Great!  So she gets to go in and have a camera go in through her nose and down her airway.  I can’t WAIT!  So we are doing that tomorrow morning at 6:30am.

Other than that, she has generally been doing very well for the past few days…

As for house stuff, I haven’t written much about that lately…

But we have made some recent changes and done some work.  The kitchen nook has been cleaned out and is now being used for its INTENDED use for the first time since we’ve moved in (8 years ago).  In fact, I am sitting in it right now, enjoying a coffee.  I actually had my breakfast in it!  We also got a high chair that would fit in here…and folds up to make even more space.  So I can sit in here and have lunch while Coraline plays with her high chair toys.  Hurray! 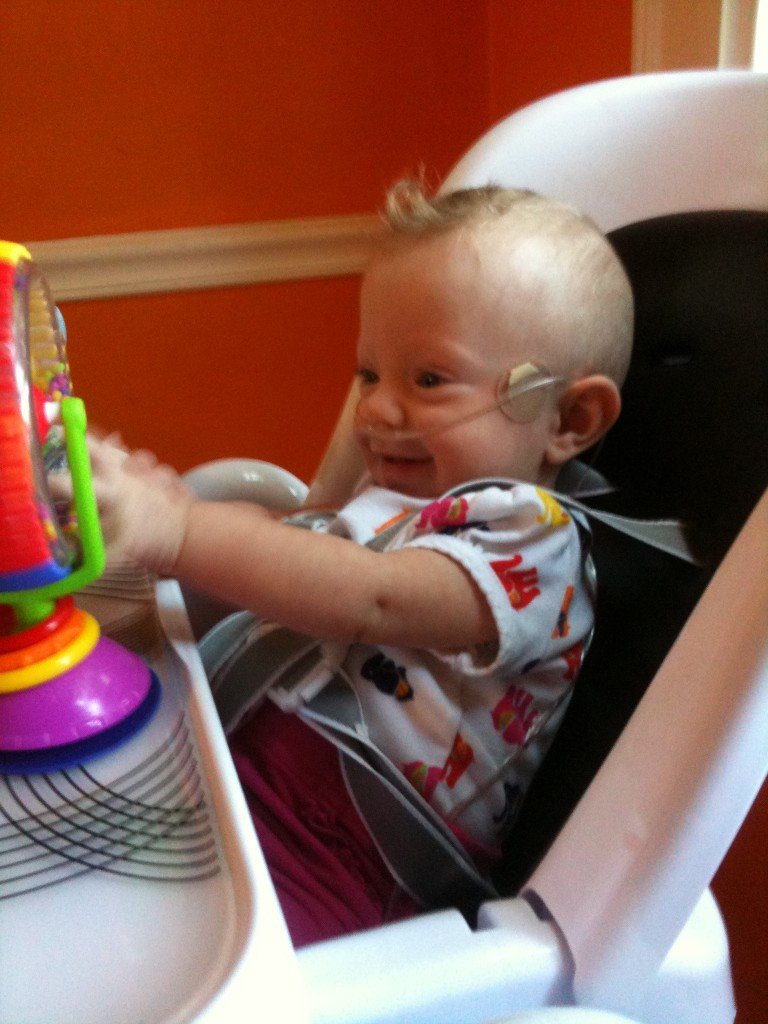 Loving on her toys.

My goal for this week is to finish painting the doors for the storage in the baby’s room….finally.  I’m not sure what’s wrong with me that it hasn’t happened yet.

Andrew has been working on a project upstairs since before the baby was born.  He works from home 3-4 days a week and hates just sitting at his desk all day.  So he’s been building a walking workstation with a treadmill.  It’s looking pretty good actually.  When the office is closer to organized I will take some pictures.  Things are looking a little rough up there right now.

We are so excited that coming up here in the beginning of August we are going to have new neighbors living right across the street.  And they are friends of ours!  Hoping that having someone else working on their house so much motivates me to do the same.

Our friend Jill got Coraline a great onesie on a recent trip and I was sick of waiting to put it on her.  It’s a little big, but here it is.  I’m pretty sure before she goes into her bronchoscopy she’ll be singing “I Wanna Be Sedated”. 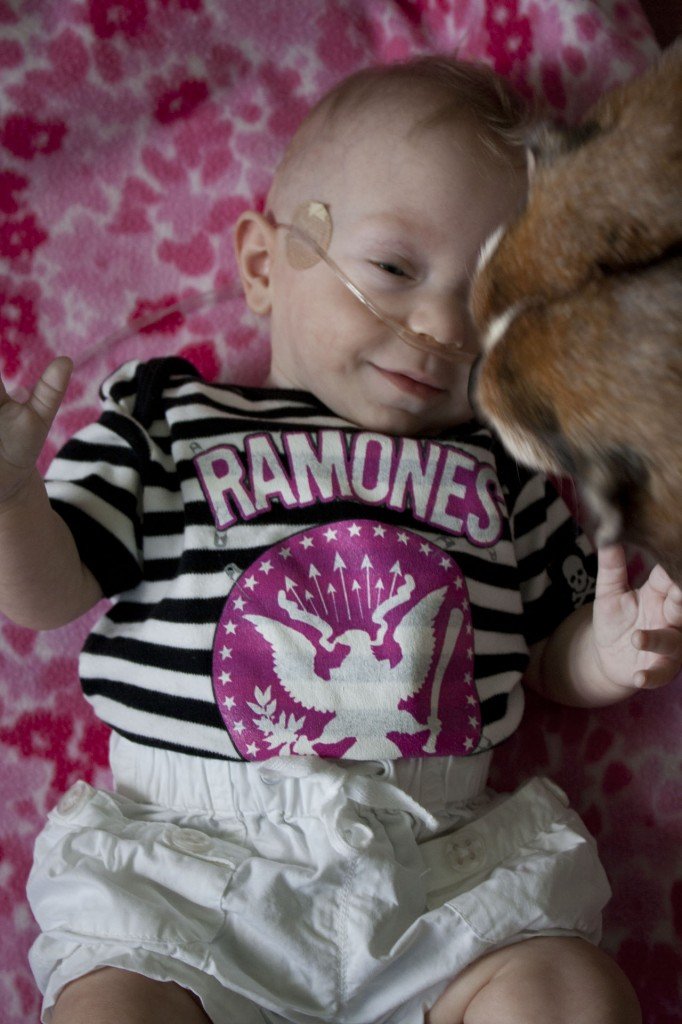 The dog always makes her smile, especially when there is close contact AND kisses. 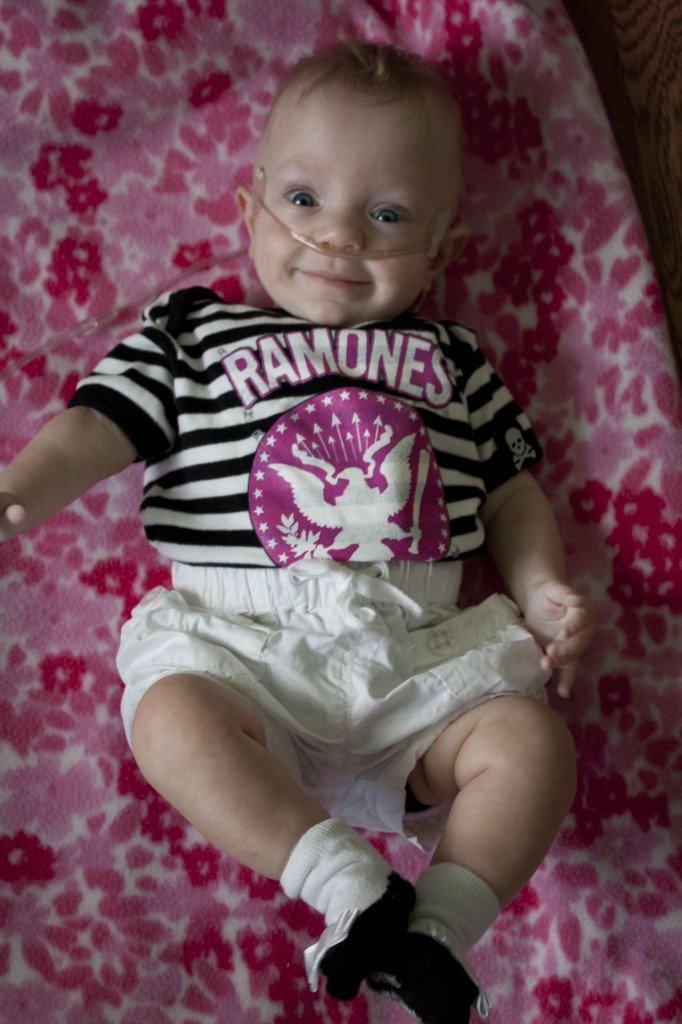 Still smiling after the dog left. He leaves a lasting impression. 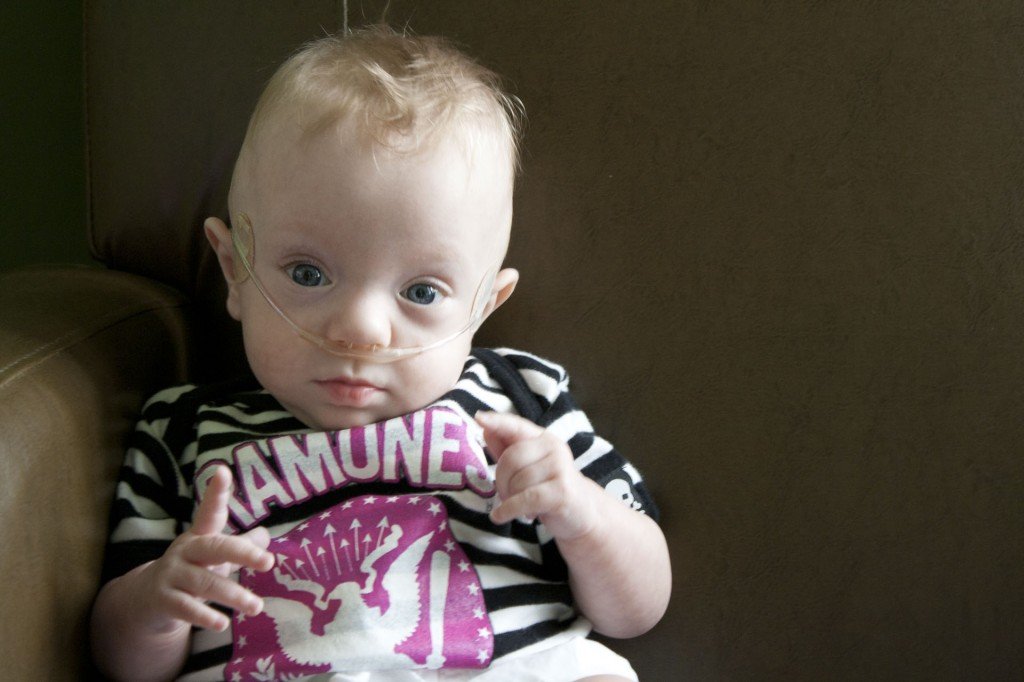 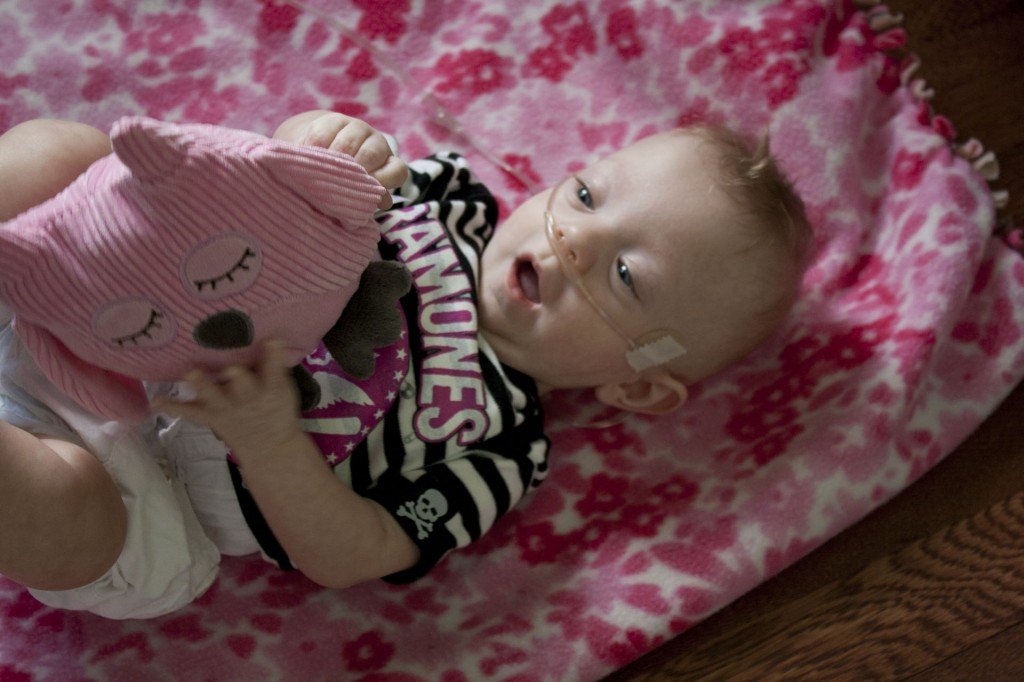 “Oh there’s a toy in my hand? That is totally going in my mouth now.”

We will put an update on FB about the bronchoscopy on Monday.